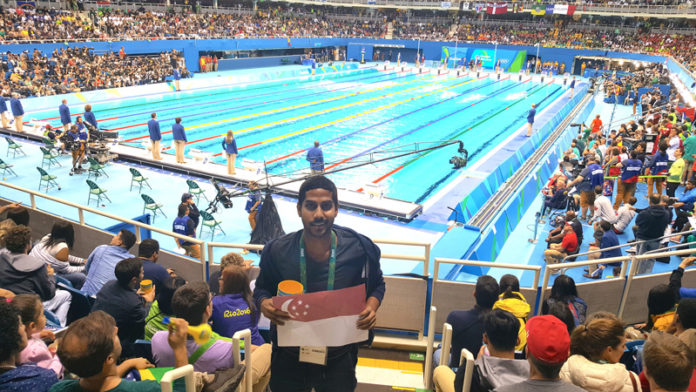 It’s truly an exciting time for sports and tech! For the first time at the 2016 Olympic Games in Rio, VR technology was introduced and NBC Universal, which holds the broadcast rights for the United States, worked together with the Olympic Broadcast Services (OBS) to provide viewers with the opportunity to “attend” the various events in virtual reality.
Viewers who owned Samsung Galaxy smartphones paired with the Samsung VR Gear headset were able to indulge in over 85 hours of VR programming. This was a huge step towards connecting millions of people to the Games and subsequent sporting events around the world! At this point, viewers were only able to witness events like fencing, beach volleyball, basketball and athletics in delay – a day after the event took place. But, given the rate of technological advancement in this day and age, it was a matter of time before you could soak in the atmosphere of an Olympic venue right from your own living room in real time!

For a Singaporean on the other hand, the Rio 2016 Olympics proved to be something truly special whether you were in Brazil or watching back home. Here’s why.

When Joseph Schooling touched the wall at the end of the 100m Butterfly event, faster than Michael Phelps and the rest of the field, he captivated an entire nation as Singaporeans sat glued to their television screens at 9am on a Saturday morning. Celebrations and cheers were heard all through the heartlands and coffeeshops as the country witnessed Singapore’s first ever Gold medal in the Olympic Games. Even when Joseph returned to a hero’s welcome at Changi Airport, one could feel the euphoria and mayhem as fans mobbed him for selfies and autographs via Facebook Live videos, filmed on smart phones and tablets. This exclusive content, posted by various local media on their Facebook pages, allowed unprecedented access to Joseph’s new found fame.

It’s important to note that VR technology at the Games not only benefited the viewers but also athletes. Through 360 degree, 3D footage, athletes could mentally prepare for their races by familiarizing themselves with the course whether it is in the sport of sailing, canoe slalom or even the triathlon. Better preparation would lead to better performances, increases in medal hauls for nations and even more records broken. The sports fan can only benefit from this in the long run.

Besides VR technology, there were other notable tech advancements throughout the Games that definitely added to the fan experience across the event. With scoreboards now integrated to the big screen, fans were exposed to replays, scores, graphics, reactions, stats and much more real time action. Whether it was the USA Men’s national basketball team dancing and fooling about on the bench as they waltzed past opponents, or the nervous looks of gymnasts awaiting their results to see if they’ve knocked the confident Simone Biles off the number one spot , or whether it was the new photofinish technology at the Athletics events that could capture better quality images with around 10,000 digital photos in a vertical line per second, one thing is certain – the connection between sports fan and athlete was truly evident.

The NFC (Near Field Communications) bracelet was also introduced during the games, enabling fans to pay for merchandise and beverages by swiping their wrist on over 4,000 payment terminals all over the various venues. Although I, personally, did not get my hands on one of these bracelets, the idea of walking around with just my VISA credit instead of a ward of Brazilian Reals was comforting given the unfortunate lapses in security that did occur during the Olympic period.

What also stood out for me was the emphasis on aerial pictures that were captured on several platforms including drones, cameras suspended on cables and also balloons. These imagery were used for security purposes, capturing uniquely different angles for various sports but also to showcase the city of Rio de Janeiro in all its beauty, with stunning views of Cristo Redentor, Sugarloaf Mountain and the breathtaking coastlines, for the entire world to see.

As we delve into a new era of better connectivity and rapid advancements in technology in sports, I cannot imagine what the fan experience would be like at the next edition of the Games in Tokyo. The best part is, we might not even have to wait until 2020!

The wave of disruption spares no one, it’s time to get...