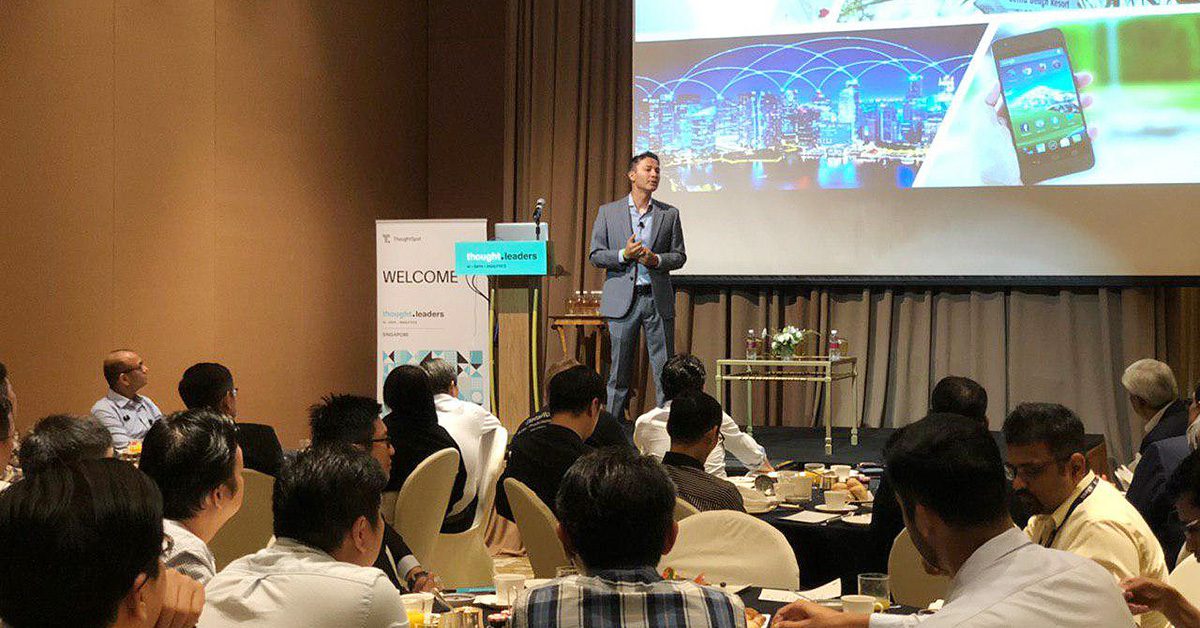 The three hottest technologies in the enterprise market today are ABC – AI, Big Data, and Cybersecurity. And the newest entrant that’s set to disrupt the way enterprises use search to get almost instantaneous results is ThoughtSpot, a company that’s just seven years old and has already forced itself into Gartner’s famed Leaders’ Quadrant in the research firm’s 2019 Magic Quadrant for Analytics and BI Platforms (released in February 2019), placing the upstart firm squarely into the same space as giants such as Microsoft, Tableau and Qlik.

Headquartered in Palo Alto, California, ThoughtSpot launch of its APAC office follows a year of substantial growth and market recognition; it has raised over USD300 million funding and brought in Sudheesh Nair as CEO.

“We’re ushering in a new era of augmented analytics by bringing simple Google-like search to complex corporate enterprise datasets,” Sudheesh told about 80 CIOs, CTOs and partners at a breakfast forum in Singapore on April 4, on the occasion of the launch of their APAC office in our sunny shores. “The analytics landscape has undergone dramatic changes in the last year. Innovations in technologies like AI, natural language processing, search, and machine learning have fundamentally changed the way companies interact with their data.”

Sudheesh made his mark as President of Nutanix, which leads in enterprise cloud infrastructure. During his term, Nutanix grew from nothing to US$1 billion in revenue and US$9 billion in market capitalisation. He joined ThoughtSpot as CEO on August 1, 2018.

“Businesses want the simplicity of search from the complex enterprise data sitting across multiple databases, platforms and devices,” he said. “But it only works when the tools to identify these insights are simple, intuitive, and easy for everyone to use – from the least technical employees, all the way to the C-suite. With advanced conversational voice capabilities and predictions, we’re lowering the barrier even further and making the most powerful analytics accessible at scale.”

The company’s list of customers includes Walmart, Cisco, HP, 7-11, Exxon-Mobile, and AIG. At the breakfast forum, Bill Zhang, Japan-based Chief Data & Analytics Officer of AIG said he opted to go with ThoughtSpot because the company was willing to push the envelope. “We did a POC (Proof of Concept) with them to figure out if they could get the solution to work on massive datasets that’s common in the insurance industry,” Mr Zhang said. “The results were amazing. We’re now going ahead full steam with them.”

The next frontier? Voice-driven AI interface. ThoughtSpot debuted this feature, called SearchIQ, in November 2018. “SearchIQ presents the ultimate solution, using voice to ensure every employee can find insights buried in billions of rows of data with just a simple spoken sentence, all without sacrificing speed, accuracy, or transparency”, Sudheesh said. “SearchIQ builds natural language processing (NLP) technology on top of our platform. SearchIQ offers a flexible and intuitive user experience that enables users to ‘converse’ with their data and search using only their voice and with casual, everyday language.”

Sudheesh went on to say that Google has done a remarkable job closing the distance between questions and answers for internet users. Likewise, ThoughtSpot with its simple-to-use computational searches, is streamlining the decision making process for enterprises!

According to market reports, ThoughtSpot’s in-memory calculation engine is the fastest analytics engine available today. It runs on AWS, Azure and Google Cloud Platform. In March 2019, the company tied up with Alteryx for data preparation and advanced analytics.

P. Ramakrishna, CEO of CIO Academy Asia, said enterprises live in a VUCA (volatility, uncertainty, complexity and ambiguity) world. “VUCA was what the US military troops found in the harsh trenches of Afghanistan,” he said. “But today, most businesses realise that VUCA is relevant and applicable to the market conditions under which they operate.”

Rama, who also moderated a panel discussion at the breakfast forum, said it would be simplistic to say “data is the new oil.” Instead, the right analogy would be “data is the new crude oil. In its crude form, both data and oil have no value and are expensive to mine and store. But once refined, both offer results or products that are not only high in value, but in utility as well.”

Building a Strong Foundation for Your Data Transformation Journey